A Year Has Passed...

This king that was, Edward I, was a shivery king with a heart of steel and a grasp for empire. As such he forged Britain through hearty attempted conquest over native celtic peoples (Welsh, Scottish Gaels and to some extent the Irish) - through invasion, then settlement and consequently the attempted eradication of the indigenous cultures. Not pretty, the stuff of empire building. Like its component, war, it is ugly and everywhere.
I am reading Marc Morris' recent popular history "A Great and Terrible King - Edward I and the Forging of Britain". It is very sobering reading, and now I have the background for the Welsh novels of Sharon Kay Penman. This work has so far turned out to be an eye opener - as this is another period where I am a little lost and thirsty for a bit of "knowledge". Sometimes I despair at my late arrival to several eras of English history, but, with an American education and a collegiate stint at classical languages, it is only in the last few years I have been lucky enough to have the time to peer into the story of these deeply fascinating British Isles.
Back to Edward (please) - I was interested to learn of his interest in Arthur as a unifying king (or so the myth that was taken as fact at the time bore out). Geoffrey of Monmouth's flight of fantasy as it is seen now was taken as history to the thinking sorts then, and may be considered a work of propaganda. I have pulled his "History of the Kings of Britain" off my shelf, so maybe next will come a walk into a subroutine of the whole Arthur shtick. Of course, Henry VII bought into all of the Arthur magic when he so named his son.
And to think England was almost ruled by a king named Alfonso.
Posted by Judy at 6:41 PM No comments:


Warning: This post may state the obvious. So many have waxed euphoric (or something) about this book that I really have nothing new to contribute. However, this state of reviews won't stop me from a couple of thoughts:
Two Thomases of Tudor England are set in opposition in the wondrously absorbing award winning novel Wolf Hall by Hilary Mantel - Thomas Cromwell and Thomas More. More has gotten much better press over the centuries, and it is gratifying to see a less favorable view that is very well presented. More's Chelsea comes off effete and barren compared to the Cromwell lair, Austin Friars. Though a ruthless servant of the King, Cromwell's home life is nurturing to the ones under his roof.
Getting home to that roof every day is a challenge for Cromwell, who, after the death of Cardinal Wolsey, his totally larger than life mentor, rises to become Henry VIII's top adviser, administrator, and general ear. Wolsey's fate stands in the background, however. These are the Anne Boleyn years, and Mantel's characterization of Anne is also original and different from the standard treatment of her in historical novels (at least the few I have read). Jane Seymour pokes her head in at times and is also portrayed in an interesting light.
The prose is also a bit unconventional, and though initially I thought the third person about one person clumsy, once I oriented myself to it the technique worked well. This is a work of original depth-charging insight, and well worth completing though it may seem a bit daunting at times.
Posted by Judy at 4:18 PM No comments: 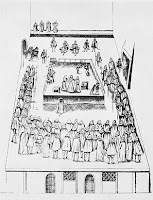 Mary, Queen of Scots - part damsel in distress, part slighted monarch, completely the prisoner who thinks deeply of escape. A sad business, the list of castle-prisons doleful and dreary, a journey from one place to another place, jailor to jailor, slowly and unfailingly towards the violent end that, by any road, couldn't be put off any longer. Alongside this slide sits an endangered and fretful Queen Elizabeth.
A Tudor/Stuart tragedy. And, as portrayed in Jean Plaidy's "The Captive Queen of Scots", so so sad. Elizabeth and Mary - bifurcated womanhood? Head and heart? A queen with a realm placed on her at a very young age vs. a queen who started as a princess with no definite future. A meeting between these two would have thematically logistically been impossible. The story would have run quite differently, methinks.
Mary is no solitary prisoner, she enjoys the continual devotion of servants and young idealistic would be rescuers. Plaidy draws them artfully, as well as she does the jailors. The sub plot of the Earl and Countess of Shrewsbury (Bess of Hardwick) is of interest as I am completely new to this pair.
At length regicide happened. But, though not Queen of England, our Mary, she may be considered the mother of the Stuart dynasty to rule for a few generations.
Posted by Judy at 4:57 PM No comments:

Labels: Bess of Hardwick, Elizabeth I, Mary Queen of Scots


I have been fortunate over the years in my license to read what appeals to me rather than something assigned. This allows one book to lead to another. The story of the doomed House of Howard depicted in "House of Treason" by Robert Hutchinson led me almost without a hiccup to "Her Majesty's Spymaster" by Stephen Budiansky. The thread is the foolhardy 4th Duke of Norfolk, only duke in the land, who tangled himself up with Mary, Queen of Scots. He was no match for Francis Walsingham, and, perhaps because I have a modest position in the civil service, I wanted to know more about "Mr. Secretary", what made him tick and how he was able to expose Mary.
Mary was reckless in her imprisonment, and Norfolk aimed too high in his hopes for the marrying of her. He was, due to his naivete, rather easily dispensed with, beheaded in 1572. Mary was the center of other plots that were laid bare by Walsingham. She was saved, perhaps, for as long as she was, by a wavering Elizabeth, who didn't want to set an example of regicide.
From here, I will step into some historical fiction, namely "The Captive Queen of Scots", by the mistress, Jean Plaidy.
Posted by Judy at 5:16 PM 1 comment: 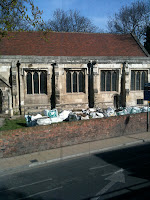 This beautiful aged church has a feature I had never seen, and have since found out is indigenous to the UK. It is called the "Devil's Door", built into the north face of some medieval and earlier churches. Here it can be seen under the third window, and is perhaps too small for a human to enter. Its purpose is to provide an escape hatch for the Devil as he carries the soul of an unbaptized child to an unpleasant place. I wonder if this practice is a crossover from pagan beliefs.
Unfortunately, I have no idea of the name of this church as I took this picture from the second storey of a tour bus, the use of which fitted our need for low impact sightseeing whilst I was suffering a coughy illness.
Posted by Judy at 7:32 PM No comments:

The Streets of York City 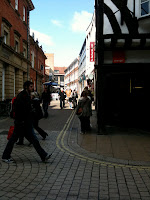 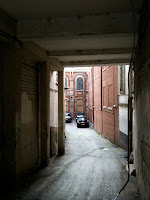 Throughout the two weeks or so we dallied in York, we returned repeatedly to the medieval streets of the City Centre. Tight and confusing to the visitor, they were exceedingly delicious. Continually becoming lost was truly a privilege. Within aged lanes were such phenomena as Poundworld, more enjoyable to experience than American Dollar Stores, and an Oxfam charity shop that I perceived to be a better deal than our Salvation Army Stores.
Posted by Judy at 7:53 PM No comments:

Judy
Rochester, NY, United States
I am a lifelong civil servant with a passion for Medieval English History. Also, I am ruled by a Wheel of Fortune which is always on the move.

All images in this blog are in the public domain.
All content in this blog is copyrighted by Judy (2008-2010)